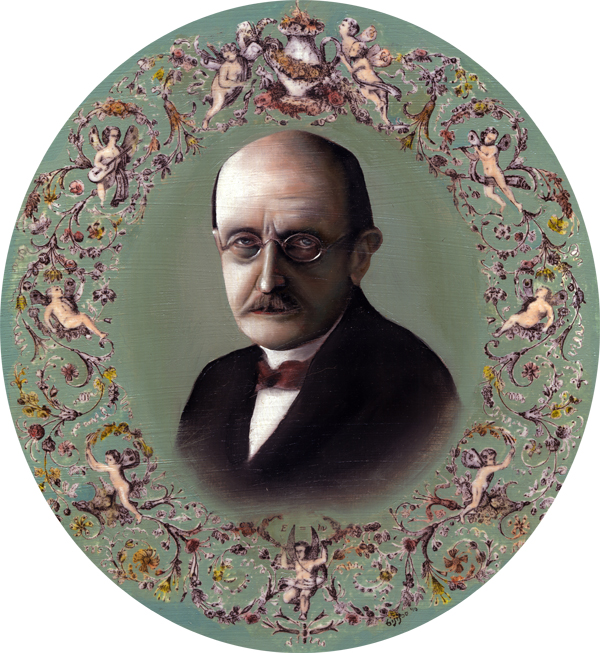 Max Planck (April 23, 1858 â October 4, 1947) was a German theoretical physicist, considered to be the founder of Â quantum theory, and thus one of the most important physicists of the twentieth century. Planck was awarded the Nobel Prize in Physics in 1918.

Munich physics professor Philipp von Jolly advised Planck against going into physics, saying, “in this field, almost everything is already discovered, and all that remains is to fill a few holes.” Planck replied that he did not wish to discover new things, only to understand the known fundamentals of the field, and began his studies in 1874 at the University of Munich. Under Jolly’s supervision, Planck performed the only experiments of his scientific career, studying the diffusion of hydrogen through heated platinum, but transferred to theoretical physics.

In 1894 Planck turned his attention to the problem of black-body radiation. He had been commissioned by electric companies to create maximum light from lightbulbs with minimum energy. The problem had been stated by Kirchhoff in 1859: how does the intensity of the electromagnetic radiation emitted by a black body (a perfect absorber, also known as a cavity radiator) depend on the frequency of the radiation (i.e., the color of the light) and the temperature of the body? The question had been explored experimentally, but no theoretical treatment agreed with experimental values.

Planck’s first proposed solution to this problem in 1899 followed from what Planck called the “principle of elementary disorder”, which allowed him to derive Wien’s law from a number of assumptions about the entropy of an ideal oscillator, creating what was referred-to as the Wien-Planck law. Soon it was found that experimental evidence did not confirm the new law at all, to Planck’s frustration. Planck revised his approach, deriving the first version of the famous Planck black-body radiation law, which described the experimentally observed black-body spectrum well. Â This first derivation did not include energy quantisation, and did not use statistical mechanics, to which he held an aversion.

In November 1900, Planck revised this first approach, relying on Boltzmann’s statistical interpretation of the second law of thermodynamics as a way of gaining a more fundamental understanding of the principles behind his radiation law. As Planck was deeply suspicious of the philosophical and physical implications of such an interpretation of Boltzmann’s approach, his recourse to them was, as he later put it, “an act of despair … I was ready to sacrifice any of my previous convictions about physics.”

The central assumption behind his new derivation was the supposition, now known as the Planck postulate, that electromagnetic energy could be emitted only in quantized form, in other words, the energy could only be a multiple of an elementary unit. At first Planck considered that such quantisation was only “a purely formal assumption … actually I did not think much about it…”; nowadays this assumption, incompatible with classical physics, is regarded as the birth of quantum physics and the greatest intellectual accomplishment of Planck’s career. Â However, Planck did not understand in a deep sense that he was “introducing the quantum” as a real physical entity. Nevertheless, it was in recognition of this accomplishment that he was awarded the Nobel Prize in Physics in 1918.

Subsequently, Planck tried to grasp the meaning of energy quanta, Â to no avail. “My unavailing attempts to somehow reintegrate the action quantum into classical theory extended over several years and caused me much trouble.” Even several years later, other physicists like Rayleigh, Jeans, and Lorentz set Planck’s constant to zero to align with classical physics, but Planck knew well that this constant had a precise nonzero value. “I am unable to understand Jeans’ stubbornness â he is an example of a theoretician as should never be existing, the same as Hegel was for philosophy. So much the worse for the facts, if they are wrong.”

Max Born wrote about Planck: “He was by nature and by the tradition of his family conservative, averse to revolutionary novelties and skeptical towards speculations. But his belief in the imperative power of logical thinking based on facts was so strong that he did not hesitate to express a claim contradicting to all tradition, because he had convinced himself that no other resort was possible.”

Planck expected that wave mechanics would soon render quantum theory unnecessary. However, this was not to be the case. Further work only cemented quantum theory, even against Planck’s and Einstein’s philosophical revulsions. Planck experienced the truth of his own earlier observation from his struggle with the older views in his younger years: “A new scientific truth does not triumph by convincing its opponents and making them see the light, but rather because its opponents eventually die, and a new generation grows up that is familiar with it.”