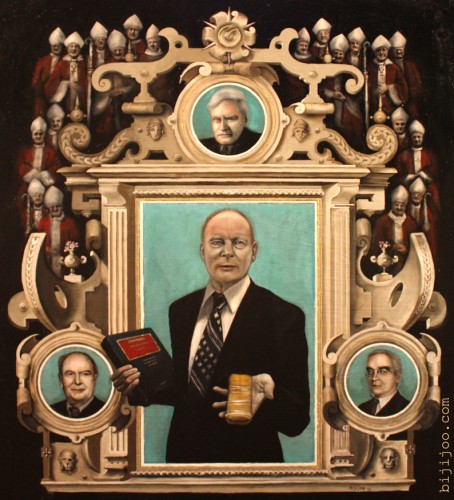 Professor Mooney is an authority on and has written extensively about American legal history and contract law. Mooney joined the University of Oregon faculty in 1972, after working with Howard, Prim, Rice, Nemerovski, Canady & Pollak in San Francisco, specializing in commercial litigation before federal and state courts and administrative agencies.

Mooney has been one of the most beloved professors at the law school. Â His classes are very tough – he’s the only professor who requires students to memorize case names and other citations for exams, and he asks hard questions – but he’s always kind and fair to students, and he buys his class maple bars once or twice a term. Professor Mooney dresses down, and wears a mixture of clothes that look like they’ve been bought from the discount rack at Macy’s over the last three decades. Â Not really the traditional sloppy professor look, but probably the closest you’ll see in law school. Â Mooney often wears an earring – a single small diamond or other gemstone in his left ear.

Professor Mooney has been teaching the same class (Contracts) for so long that it feels like a performance sometimes. Â As an example, one of the first cases in every Contracts class is Hamer v. Sidway (~1885), about a nephew who sued his uncle to pay the $5000 he promised on condition that the nephew abstain from smoking or drinking until the age of 21. Â The nephew was not named Hamer, and the uncle was not named Sidway. Â After going over this case for 20-30 minutes, he says “I just have one more question: Â Who the hell are Hamer and Sidway?” Â  And the class laughs. Â (They are people who bought the nephew’s and uncle’s original obligations). Â He has always taught from Farnsworth’s casebook which he holds in his right arm in the painting.

Mooneyâs upper-level courses were about American legal history and historical figures, and there are three judges he especially likes because of their excellent jurisprudence: Benjamin Cardozo (top center), Learned Hand (bottom right), and J. Skelly Wright (bottom left). The 20 bishops in the painting are in reference to one of Mooney’s favorite quotes, from a case Learned Hand decided:

“A contract has, strictly speaking, nothing to do with the personal, or individual, intent of the parties. A contract is an obligation attached by the mere force of law to certain acts of the parties, usually words, which ordinarily accompany and represent a known intent. If, however, it were proved by twenty bishops that either party, when he used the words, intended something else than the usual meaning which the law imposes upon them, he would still be held, unless there were some mutual mistake, or something else of the sort. Of course, if it appear by other words, or acts, of the parties, that they attribute a peculiar meaning to such words as they use in the contract, that meaning will prevail, but only by virtue of the other words, and not because of their unexpressed intent.” Â Hotchkiss v. National City Bank of New York, 200 F. 287, 293 (D.C.N.Y. 1911).

Tribute to Jim Mooney in the Oregon Law Review (.pdf)