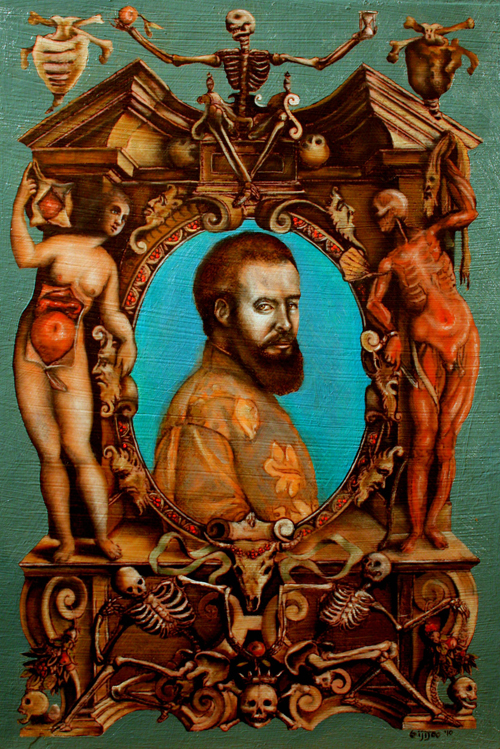 Andreas Vesalius (December 31, 1514 â October 15, 1564) was an anatomist, physician, and author of one of the most influential books on human anatomy, De humani corporis fabrica (On the Workings of the Human Body). Vesalius is often referred to as the founder of modern human anatomy.

As a boy, Vesalius showed great interest in the dissection of animals. After pursuing his early studies at Louvain, he went to the University of Paris in 1533, where Johannes Quinterus of Andernach and Jacobus Sylvius taught medicine. At the university, Vesalius gave his attention largely to anatomy, especially to that of bones found in cemeteries and at places of executions. He dissected entire animals and gained in this way so much knowledge that at the request of his teachers and fellow students he publicly dissected a corpse and explained its parts.

Vesalius took the degree of Doctor of Medicine, and was appointed professor of surgery and anatomy at Padua. Contrary to custom, Vesalius dissected the bodies himself and explained the different parts: the former usage had been for a surgeon to dissect while a physician read aloud suitable chapters from Galen or the Anatomie of Mundino. In 1538 he published the Tabulae anatomicae from his own drawings and those of the painter Johann Stephan of Kalkar; this was the first fruits of his investigations. His labors led him to the conviction that Claudius Galenus had never dissected the dead body of a human being, and that Galen’s celebrated Anatomy lacks the stamp of truthfulness, as it is based almost entirely on the dissection of apes.

In 1540 he began his celebrated work Fabrica (see link below to view the publication), in 1542 went to Basle in order to supervise the printing of it, returned to Padua at the end of 1543 after the publication was completed, spent a short time in Bologna and Pisa, and in 1544 was appointed court physician to the Emperor Charles V. Up to the time of the emperor’s abdication in 1556, Vesalius accompanied Charles on all his journeys and campaigns. After the abdication he entered the service of Philip II of Spain. For unknown reasons, in the spring of 1564 he undertook a pilgrimage to the Holy Land, from which he never returned.

The border in the portrait of Andreas Vesalius is after the title page from Vidi Vidii: Florentini de anatome corporis humani libri VII the anatomic treatise by Vidius Vidius (Guido Guidi, c.1508-1569), an early physician/anatomist, published posthumously in 1626. Â Little is known of Guido Guidi. Anatomic structures named after Vidius include the Vidian nerve, artery, and canal well known to neurosurgeons.